Although deprivation is concentrated in urban areas, it is more widespread. In Suffolk and North East Essex 8.6% of those living in income deprivation live in a rural area – equating to over 10,133 people.

Between 2010 and 2015, at the local authority level, Suffolk was among the four authorities with the largest increases in deprivation; although between 2015 and 2019 this was a much less significant change.

Deprivation can have an impact across the life course and different groups in the region face particular challenges. Across the districts, 27,400 children live in low income families. In all districts at least 1:10 children experience low income – increasing to almost a quarter of children in Tendring.

The 2010 Marmot Review – Fair Society Healthy Lives – highlights the relationship between deprivation and a wide range of the major health issues such as mental health, cancer, diabetes, obesity, circulatory disease, infant deaths and alcohol-attributable hospital admissions. In Suffolk and North East Essex deprivation is resulting in shorter lives. The charts below show the difference in life expectancy between the most and least deprived. For women, while two districts suggest little difference, for others deprivation potentially reduces life by between around 3 and 8 years. The most deprived men in Suffolk and North East Essex are expected to live between about 3 and 11 years less than the least deprived men.

*For Mid Suffolk males the value cannot be calculated as the
number of cases is too small.
Source: Public Health England, 2019

“People with higher socioeconomic position in society have a greater array of life chances and more opportunities to lead a flourishing life. They also have better health…This link between social conditions and health is not a footnote to the‘real’ concerns with health…it should become the main focus”.

Education is key to improving life chances. In 2017/18 young people in only three of the districts have matched or exceeded average educational achievement at the end of Key Stage 4. Educational achievement in three districts was significantly lower than the national average (Forest Heath, Ipswich and Tendring). Young people from poorer backgrounds are especially disadvantaged. Around a third of pupils who are eligible for free school meals achieve the average attainment level, compared with half of all other pupils. 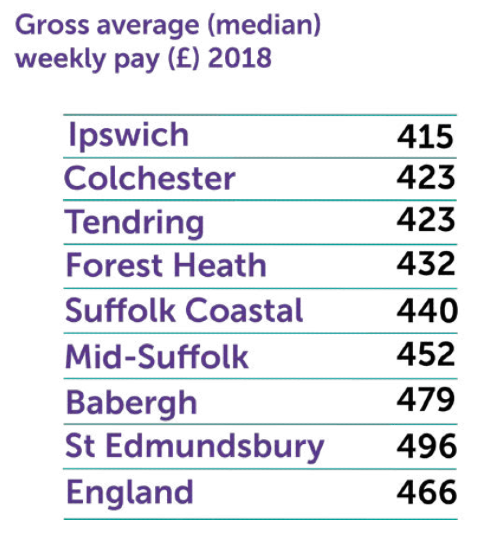 The Social Mobility Index estimates the life chances of people from disadvantaged backgrounds based on a range of measures including the quality of local nurseries and schools, household income (free school meals), house prices, wages and employment opportunities. In terms of the overall rank, Babergh, Forest Heath, Ipswich and Tendring are placed inthe lowest 20% for social mobility 29. Other districts rank much higher,suggesting that children and young people’s life chances are significantly different depending on where they live. Employment is the best way to escape and avoid poverty.

Overall employment rates in the area are broadly in line with the average rate for England – in most districts rates are higher than average; in two they are lower. However, across most districts average wages are less than for England. In four districts gross weekly pay is over £30 less than the national average.

Any cookies that may not be particularly necessary for the website to function and is used specifically to collect user personal data via analytics, ads, other embedded contents are termed as non-necessary cookies. It is mandatory to procure user consent prior to running these cookies on your website.